Getting Fit Does Not Have to be Painful

“Every week we meet new patients at Forster Physical Therapy who have been injured by unscientific fitness programs. High intensity workouts are the rage now and far too many people are getting injured following the “No Pain, No Gain” mantra right into the Physical Therapist clinic. Programs like P90x, Crossfit, and Soul Cycle have people believing that to get fit means to suffer. I can tell you that even our professional and Olympic athletes don’t train as hard as these programs have out-of-shape homemakers and businessmen training, and neither do they get you looking your best or performing at your fittest”

“The secret is called periodization training, and it works for everyone, at any age” 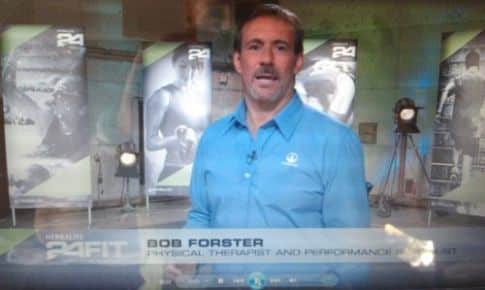 Robert Forster developed the Herbalife 24FIT Workout program with Herbalife. He is one of the leading physical therapists for athletes, both recreational and elite. Over the course of his 30-year career, he has successfully trained Olympic gold medalists, U.S. Open and Wimbledon champions, NBA superstars and triathlon world-record holders. Tired of encountering ill-advised training programs that only cause more injury, Robert created a new approach to physical therapy, which is divided into phases that follow the body’s natural healing and growth patterns.

But fitness experts say proper conditioning can make the difference between a fun weekend on the slopes and one waylaid by injury.

To minimize fatigue and risk of injury, Forster, physical therapist to 42 Olympic medalists, suggests getting in ski-shape before hitting the slopes.

“All fitness begins with an aerobic base,” he said. “So six weeks before, start training with an elliptical trainer or stationary bike, or running or walking. Build up to 20 to 30 minutes three times a week.”

Aerobic training also strengthens muscles, Forster said, so any subsequent agility drills, such as running sideways or skipping, will be even more effective if you’ve established an aerobic base.

Stretch before skiing to protect against injury and enhance freedom of motion; stretch afterward to return the muscles to their normal length, said Forster.

He calls stretching the single most important thing people can do for body health maintenance.

“Connective tissue shortens with time,” he explained. “We stretch to maintain good alignment of the bones.”

Transform Your Body Into A Fat Burning Machine!

NBC Dr. Bruce Hensel explains Conquering The Fit But Fat syndrome! Everyone is working out but no one has the body they want. Phase IV Metabolic Testing unlocks the mysteries of your personal physiology and provides the clear path to becoming a “better butter burner”!

Robert Forster, CEO & Founder of Phase IV and Forster Physical Therapy has teamed with Herbalife to create a fitness program using the very science that has made Robert so successful.   Forsters 30 years of exeperience can now be seen on a set of 13 DVDs.

In this radio interview Warren Olney asks Robert Forster about Kevlar Training the athletes! Robert is in London for the Olympics at the time of the interview. The relevant section starts 3mins into the interview. He talks about infrstraucture building for the human body, toughening the joints,  creating stability at every joint, what they call Kevlar Training so it makes the athletes bullet proof, so they dont breakdown on the track.

Robert Forster of Santa Monica is a physical therapist on Bob Kersee’s team who’s been to five Olympiads. One of his athletes, Dawn Harper, won a silver medal in the 100 meter hurdles on Tuesday and Allyson Felix won gold in the 200-meter sprint.

Robert Forster, CEO & Founder of Phase IV and Forster Physical Therapy has teamed with Herbalife to create a fitness program using the very science that has made Robert so successful. His 30 years experience are now available on a set 0f 12 DVDS called 24Fit.