Why Do Women Lose Weight Slower Than Men

Too many women figure that they’re ‘not trying hard enough’.  But it usually isn’t that they aren’t doing enough – or that men are trying harder.  It really comes down to the fact that men and women are simply made differently – and those differences have a big impact on women’s weight loss rates.

Here’s what’s at play.  The number of calories that your body requires – just to fuel its most basic functions – is determined by a couple of things.  First is simply your total body size – it takes more calories to fuel a large body than it does a smaller one.  Most men are larger than women, so chalk up one for the guys. 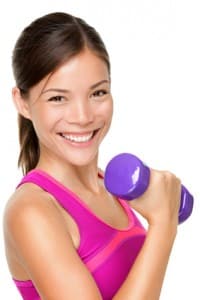 Then there’s the issue of body composition – every pound of lean body mass you have burns about 14 calories a day, while every pound of fat you have only burns about 2 calories.  So, the more muscle you carry (and the less fat) the greater your daily calorie burn.   Score another one for the guys…not only are their bodies bigger, they tend to carry more muscle than women do, too.

As if that weren’t enough, men are more likely to burn more calories when they exercise.  Again, it’s not that they’re necessarily pushing themselves that much harder – it’s just that the larger the body, the more calories it takes to move that body through space.  A 250-pound guy is going to burn more calories running for an hour than a gal weighing 150 pounds – even if they go at the same pace.

So it boils down to this:  the number of calories it takes for the average man to maintain his weight is higher than it is for the average woman. And that can be a big advantage to men when it comes to weight loss.  A heavy-set guy who maintains his weight on 2500 calories a day can cut out 1000 calories or so from his daily intake, still have a reasonable 1500 calories to spend on his meals and snacks, and drop a couple of pounds a week.

On the other hand, his girlfriend who is struggling with her weight might be maintaining on only 1600 calories or so.  To lose weight safely, she shouldn’t cut her intake to less than 1200 calories a day – which means that while he can easily create a 1000 calorie-per-day shortage, the 400 calories that she’s able to cut means she’ll be hard-pressed to lose even a half a pound in a week’s time.

I think it’s great when couples work together to try to get in shape.  Because, when it works, they can help support and motivate each other.  But when it doesn’t work, it’s often because she resents him for losing more quickly, or he faults her for ‘not trying hard enough’.  It’s not a contest, and even if it were, the playing field simply isn’t level. And in any other match-up, that just wouldn’t be fair.